When we began work to save children’s lives by improving access to Oral Rehydration Salts and Zinc in remote areas of Zambia, less than 1% of children with diarrhoea were getting the simple life-saving treatment. By the end of last year, over half (53%) of children in our target areas received ORS and ZInc, and Kit Yamoyo supplied the vast majority of these treatments (77%).

These are the results from visiting over 600 households in remote areas served by our KYTS-ACE project (or to give it its full name: the Kit Yamoyo Transition to Scale – Adapting to Challenging Environments). The 14 districts we served were selected by Zambia’s SUN Programme (Scaling Up Nutrition Programme); those with the highest child nutrition challenges, low population, low incomes and challenging distances. These districts are generally remote, rural with low population densities. Because of this, we focussed on public sector Health Centres (designing the GRZ ORS/Zinc co-pack for delivery by the Government of the Republic of Zambia – GRZ). But we also trained small shop-keepers and opened up distribution through Shoprite supermarkets. The over-riding opinion of health staff and policy makers, is that both public and private sector supply can – and must – continue. More on that below. 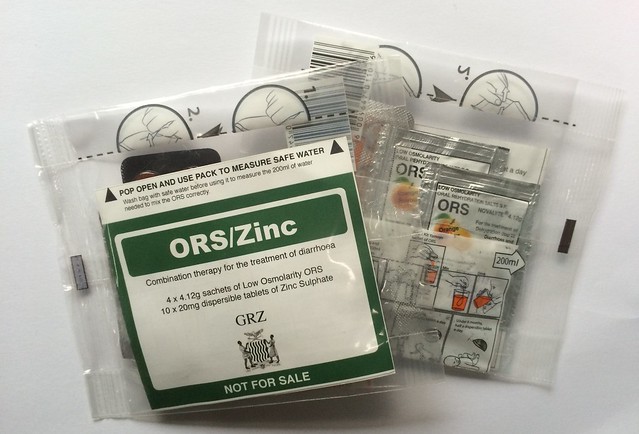 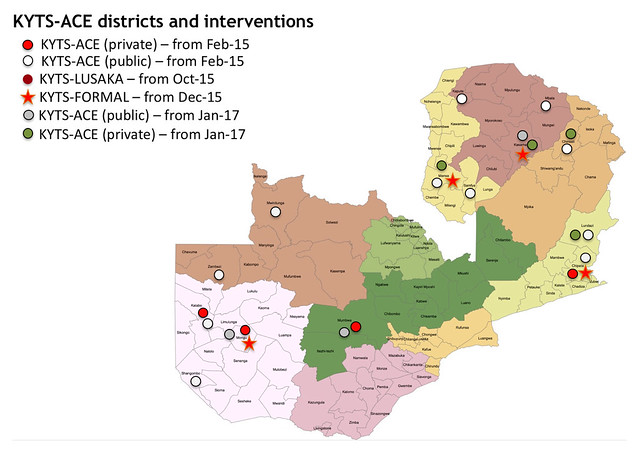 The household survey was undertaken in two of the 14 districts: Mongu and Chipata. Both of these districts are the capital of their respective provinces (Western and Eastern respectively). Both have a Shoprite store and small retailers were trained to sell Kit Yamoyo in both districts, from Feb-15. In Chipata, distribution of the ORS/Zinc co-pack we designed for the government started in Jan-16 and in Mongu distribution started in Jan-17. Households were selected using the random walk method within the green circles of the maps below. The circles are 6 km in diameter and at the centre of each is either a health centre or retailer, chosen at random. In all, 638 households took part in the survey. 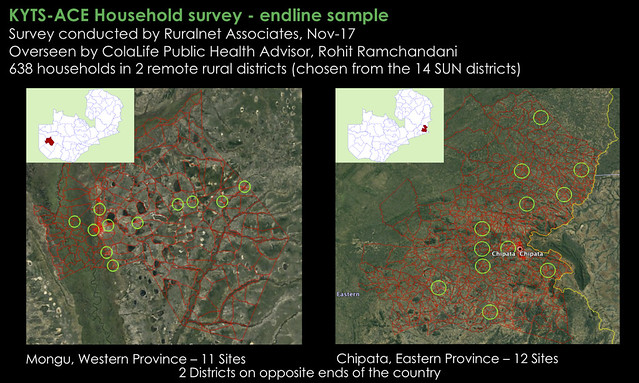 The table below shows the sample achieved using the above sampling method. 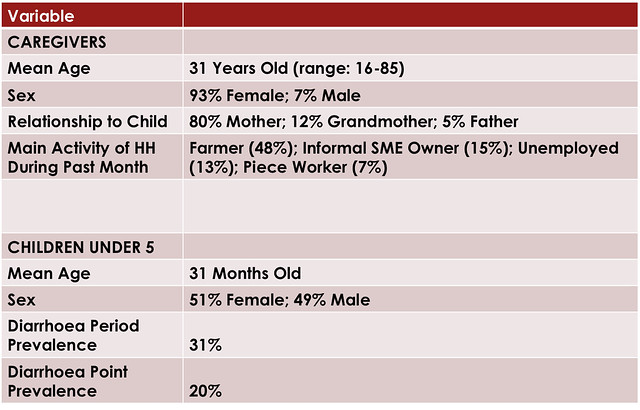 The results (the overview)

The way sample broke out is summarised below. The key findings are: 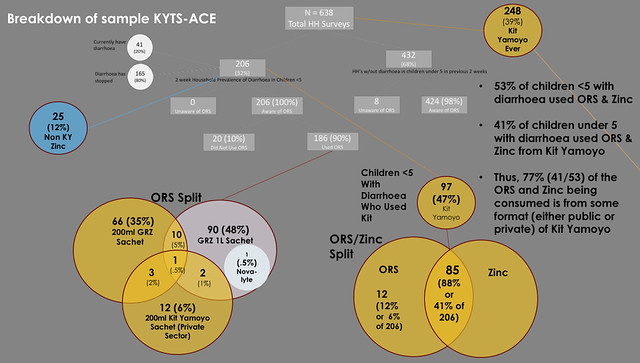 This is a significant shift from the situation in our initial trial where we found that less than 1% of diarrhoea cases were treated with ORS and Zinc. It is also interesting to note that the coverage rate achieved here (41% of children under 5 with diarrhoea being given ORS and Zinc from a Kit Yamoyo design) is similar to the 45% coverage rate achieved in our 2012/13 trial.

Coverage is important but just as important is the type of coverage achieved. The table below shows that KYTS-ACE was effective in reaching disadvantaged groups and people at high-risk because of poor nutritional status. 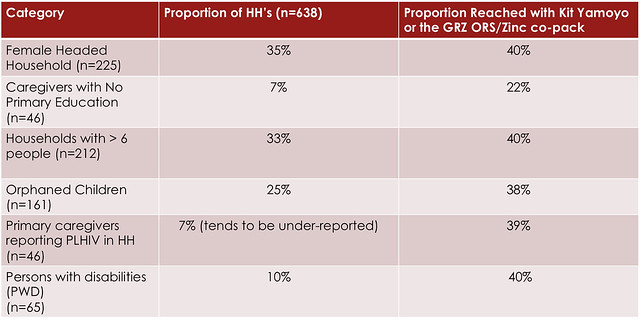 Which kit format was used?

Of those who used ORS and Zinc from one our our co-packs, 68% of diarrhoea cases were treated with the GRZ ORS/Zinc co-pack given out free at government health centres and 36% were treated with one of the commercial formats. Note that some users had used more than one format. 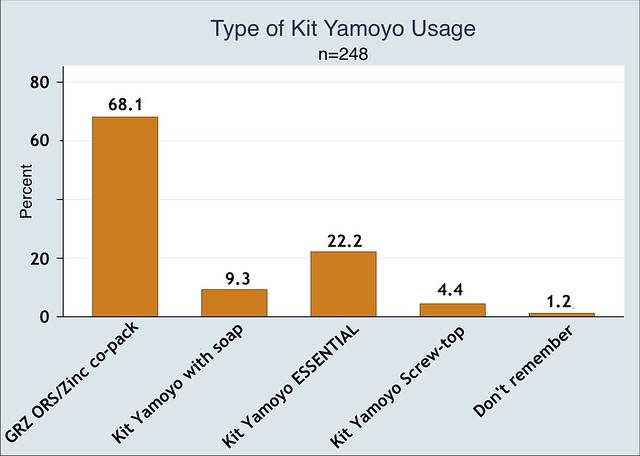 Adherence to medicine is a problem worldwide and Zinc supplementation is no exception. In our initial trial (2012/13, Zinc tablets were new to the population, yet we managed to achieve the 10-day adherence by 33% of caregivers. Subsequent to the trial, the Kit Yamoyo manufacturer started producing their own Zinc; this presented the opportunity to design a blister pack to encourage better adherence. This process is documented more fully here: Designing for better Zinc adherence. The Kit Yamoyo kits used in the KYTS-ACE project all had the locally produced Zinc. We were pleased to see a small increase in adherence, with 39% of caregivers using Zinc for the prescribed ten days. Strictly speaking, we can’t directly attribute this to the re-design of the Zinc packaging – but it is a move in the right direction. Alongside design, there is an on-going requirement for awareness raising and training for caregivers and for those dispensing Zinc. 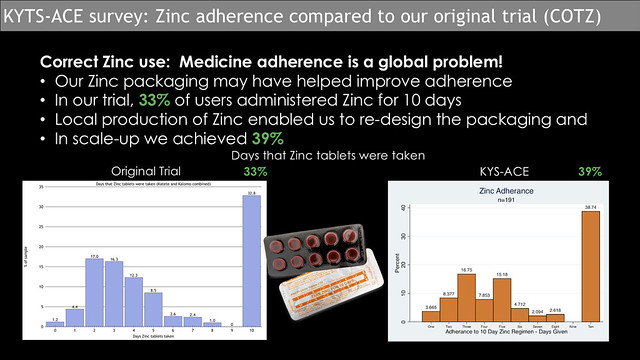 The effect of co-packaging on dispensing practice

In parallel with the household survey, we commissioned a small survey on dispensing behaviour. In Mongu District, we selected 8 health centres which were adequately stocked with all dispensing options for diarrhoea available, in both Oct-16 and Oct-17. We wanted to compare dispensing behaviour before and after the new GRZ ORS/Zinc co-pack was available. In Oct-16, before the introduction of the co-pack, all centres had both ORS and Zinc in stock throughout the month, as separate items, so frontline staff were able to choose to dispense ORS alone or ORS together with Zinc. In these health centres, 176 cases of diarrhoea were treated in the month; 44% (77) were give both ORS and Zinc. In Oct-17, the same health centres had both ORS and Zinc in stock, plus the new GRZ ORS/Zinc co-pack. In this month, we saw cases treated correctly nearly double: 87% of cases were treated with ORS and Zinc, and of these, 87% (337) of treatments were delivered with the GRZ ORS/Zinc co-pack. This is a huge and very encouraging change. 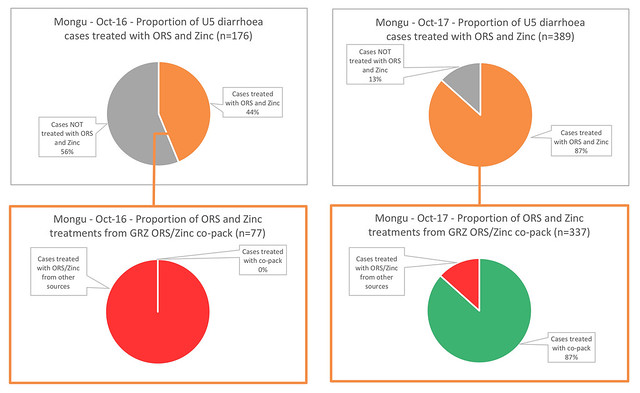 Where improvements are still needed

Use of measuring function

There is still design work to be done though. A triumph of the initial trial was the improvement in the way ORS was mixed. Our trial showed that if you give caregivers the usual 1 litre ORS sachets only 60% mix the ORS correctly. This may be attributed to a lack of awareness of what a litre is and/or the unavailability of vessels with which to measure a litre. This is discussed more fully here: A picture is worth a 1000 words: visualizing the challenges of effective diarrhoea treatment. In contrast to this, 93% of caregivers who used the original Kit Yamoyo mixed the ORS correctly; this was attributed to the fact that the original, rigid Kit Yamoyo packaging could be used to measure the amount of water required to mix the 200 mL ORS sachets in the Kit Yamoyo.

Unfortunately, this advantage of Kit Yamoyo is not seen in the KYTS-ACE data. Only 54% of Kit Yamoyo users with diarrhoea in the last two weeks mixed the Kit Yamoyo ORS correctly. The most significant difference between the trial and the scale-up is the design of the kit packaging. In the trial, it was made from rigid plastic; in the scale-up it was a flexible, gusseted bag. Although the bag was designed to measure the water it was not always used to do so. 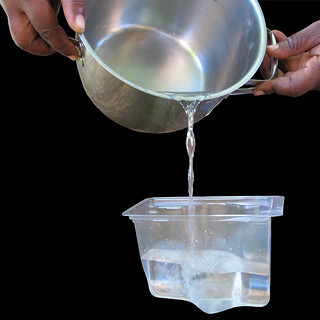 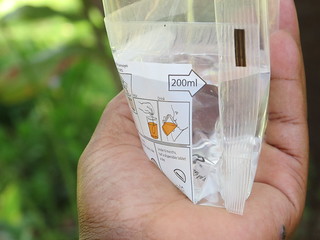 The bag has huge distribution and cost benefits: it is cheaper, it very efficient in use of space when packed, and it could eventually be made locally. But it isn’t ‘intuitively’ seen as a measuring vessel, so we need to reinforce the message that the Kit Yamoyo bag can act as a measure.

1. Lobby for the public procurement of co-packaged ORS and Zinc

It is clear that co-packaged ORS and Zinc increases access to the global recommended treatment for diarrhoea: ORS combined with Zinc. We need to lobby for the continued public procurement of co-packaged ORS and Zinc and for this to be supplied nationwide (not just to SUN districts). Global evidence shows that this will reduce child mortality and stunting.

Our findings align with experience in other countries. In 8 states in Nigeria, coverage rates of 31% have been achieved following the distribution of co-packaged ORS and Zinc via government health facilities (Source: CHAI).

Distribution of co-packaged ORS and Zinc is the next piece of low-hanging fruit in the challenge to improve child health.

2. Lobby for co-packaged ORS and Zinc to be added to the Zambia Essential Medicines List (ZEML)

3. Lobby for co-packaged ORS and Zinc to be added to the international WHO Essential Medicines List (EML)

The WHO EML acts as model that national governments tend to follow. Getting co-packaged ORS and Zinc on the WHO EML would have a cascade effect. The WHO EML is reviewed every two years and the deadline for applications for consideration in the next review is Nov-18. We have a consortium behind us to lobby WHO, and a number of ‘listening ears’ at the organisation open to reviewing our evidence.

4. Raise awareness that our designs are ‘open-source’ and free for anyone to use

Please do your bit to help us, by sharing this blog post!

This blog post appeared first on the ColaLife Blog.
Other blog posts containing KYTS-ACE findings can be found here: colalife.org/category/kyts-ace-findings

In Lukulu district at a groundnuts field for a Community Champion (Ms Mary Tunde) of Salihongo Village in Kasheke... read more

How we monitor progress across the country at KZF

KZF works all over Zambia and keeping track of what’s happening and providing support to remote field staff can... read more

These training ‘flashcards’ were developed following the ColaLife Operational Trial in Zambia (COTZ)*. They have been approved by Zambia’s... read more